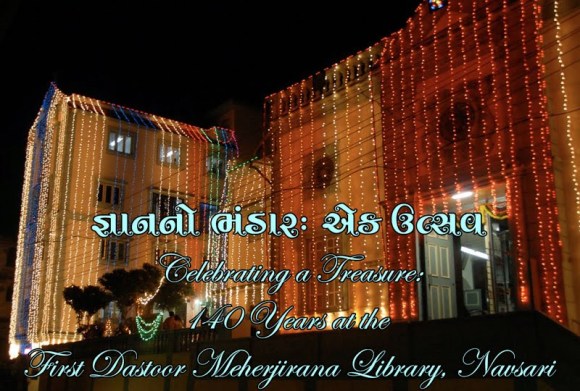 Tomorrow is an important day in Navsari: the inauguration of an international conference on Zoroastrian and Parsi studies, “Celebrating a Treasure: 140 Years at the First Dastoor Meherjirana Library,” held at the Meherjirana Library in Tarota Bazaar. The conference will last until 15 January and will include some of the world’s leading authorities on Zoroastrianism. It has been a pleasure for me to serve as one of the organizers of this conference.

The First Dastoor Meherjirana Library has been serving the people of Navsari as well as the Parsi and scholarly community since 1874. The library is named after one of the most significant figures in the history of the Parsi community, Dastur Meherji Rana (b. 1534), a Parsi priest who visited the court of the Emperor Akbar in Fatehpur Sikri from 1578-79, who, according to tradition, represented the Zoroastrian faith in the inter-religious dialogue at the Mughal Court.

According to the Mughal historian Badaʼuni, the Zoroastrians at the court impressed Akbar so much that he ordered Abu’l Fazl, his vizier, to keep a sacred fire burning day and night. Upon his return to Navsari, Meherji Rana was honored with the title of vada dastur (high priest). The hereditary line of Meherjirana priests—who, over the centuries, amassed a vast collection of Zoroastrian manuscripts and books—continues to this day.

The Library now holds this family collection in addition to other valuable material, making it one of the most important research libraries in the world for the study of Zoroastrianism and Parsi history, as well as the history of Gujarat and western India. A selection of the library’s most important manuscripts, some of which are more than six hundred years old, will be on exhibition during the conference.

In the past ten years, the UNESCO Parsi Zoroastrian Project (Parzor) and the Sir Dorabji Tata Trust have assisted with the refurbishment of the library, the restoration of manuscripts and rare books, and the construction of a new annexe.

In order to celebrate the international importance of this institution, the trustees of the Library and Parzor decided to organize a major conference focusing on Zoroastrian and Parsi studies.

The conference has been designed with two purposes in mind. First, we aim to familiarize international scholars with the resources of the Library. Secondly, we desire to promote interaction between these scholars and the local Navsari community, which has been a cradle of so much Parsi tradition and history over the centuries.

The conference will bring together some of the world’s leading scholars of Zoroastrian studies as well as several Zoroastrian high priests, providing a unique confluence of academic and priestly knowledge. On the evening of 12 January, Dr. Dasturji Firoze M. Kotwal, the most respected scholar-priest in the Parsi community, will deliver an inaugural lecture.

Amitav Ghosh, the acclaimed novelist whose most recent work, River of Smoke, features a Parsi protagonist, will deliver a special plenary address on the morning of 14 January.

A range of scholars from India and abroad—including professors and researchers from Harvard, Princeton, Oxford, the School of Oriental and African Studies (London), Free University of Berlin, Waseda University (Tokyo), Jawaharlal Nehru University, and the universities of Delhi and Mumbai—will feature on panel discussions.

These panels will focus on themes such as Parsi history in Gujarat and Mumbai, Parsis in modern India, Parsi rituals and traditions, study of the Avesta (the Zoroastrian holy text), and Zoroastrian manuscripts. Reflecting our commitment to the Navsari community and the broad promotion of knowledge beyond academia, scholars will tailor their presentations to a general audience.

In order to take full advantage of the richness of our surroundings in Navsari, the conference will feature several staples of Parsi culture: a Parsi Gujarati natak performed by Yazdi Karanjia’s troupe from neighboring Surat, demonstrations and exhibits of Parsi embroidery and textiles, and, of course, hearty Parsi cuisine.

The conference is being supported through the generosity of the Sir Dorabji Tata Trust and Mr. Nusli Wadia.

To learn more about the conference, please see our website.

One Reply to “Meherjirana Library Conference”